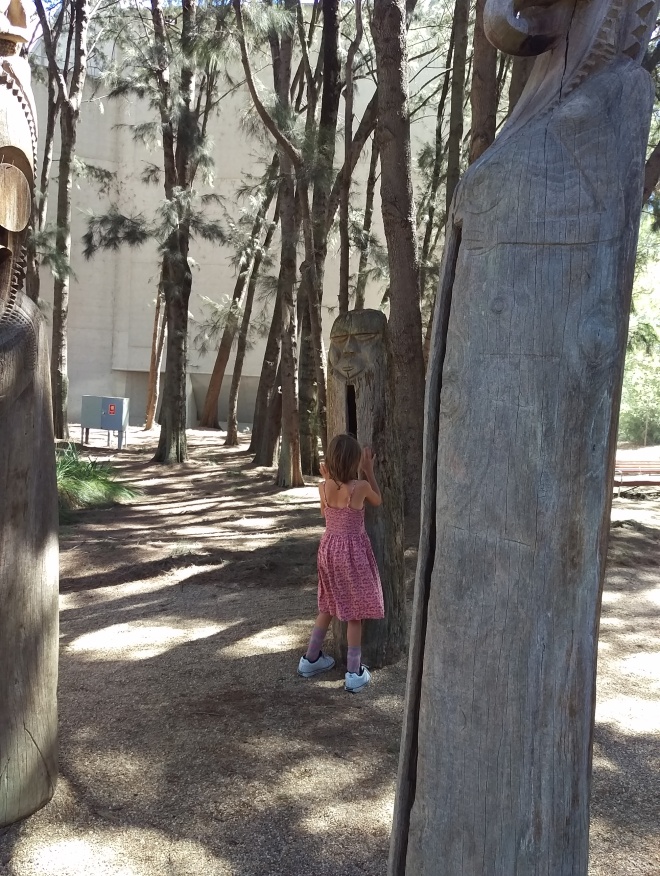 We’ve spent a few days near Canberra recently and over two days took the children to the National Gallery and Museum.
We were all very impressed with the art gallery and spent a relaxed afternoon wandering through the galleries and exhibitions.
After filling our bellies in the sculpture garden and admiring the sculptures (particularly the slit drums) we entered the gallery, starting with the Indian and East Asian gallery.
I thought I’d take a few photos of some of the children’s favourite pieces….

The Indian and East Asian gallery was Elki’s favourite in all of the NGA. He loved so many pieces, exclaiming over many of the ‘archaeological finds’; his fascination with archeology rekindled. This throne was a particular favourite.

Anusha loved this statue. We read through its explanation a couple of times and she showed me the parts she liked best; the jewelled waist and chest.

Waterlilies by Monet was a favourite of Elki’s. He chose it not realising it was by Monet, whose paintings we have on the walls at home. He then showed me another painting he really liked before noticing it was also a Monet!

Another piece Elki liked was this by Frank Stella,

And he absolutely loved this Astronaut Refugee. 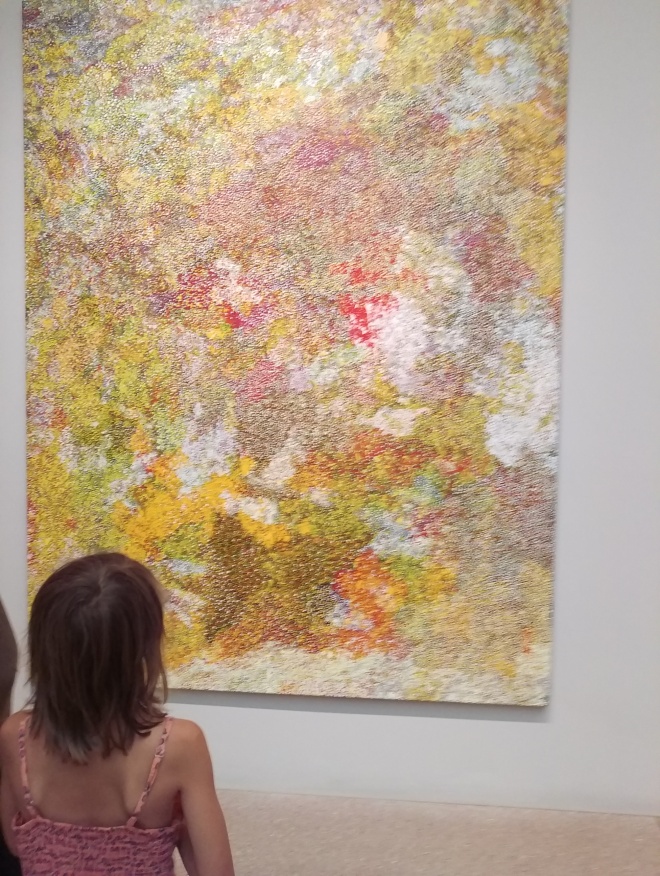 As we strolled through the Aboriginal gallery Anusha found this one amazing,

and she showed me two favourites; this one,

This was Elkis favourite of the Aboriginal paintings.

We first noticed this awesome didgeridoo garden from above and as we walked through the children chose their favourites.
This one Anusha’s, 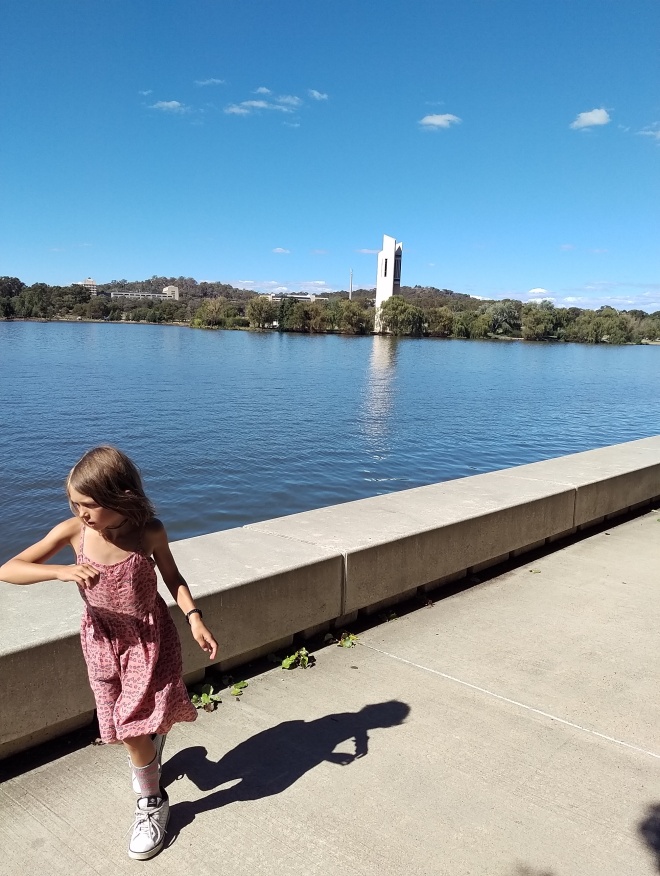 We left the main gallery to find the Contemporary gallery; the children interested in an exhibition there. Anusha loved the music we could here floating over the lake from the Carillon tower. 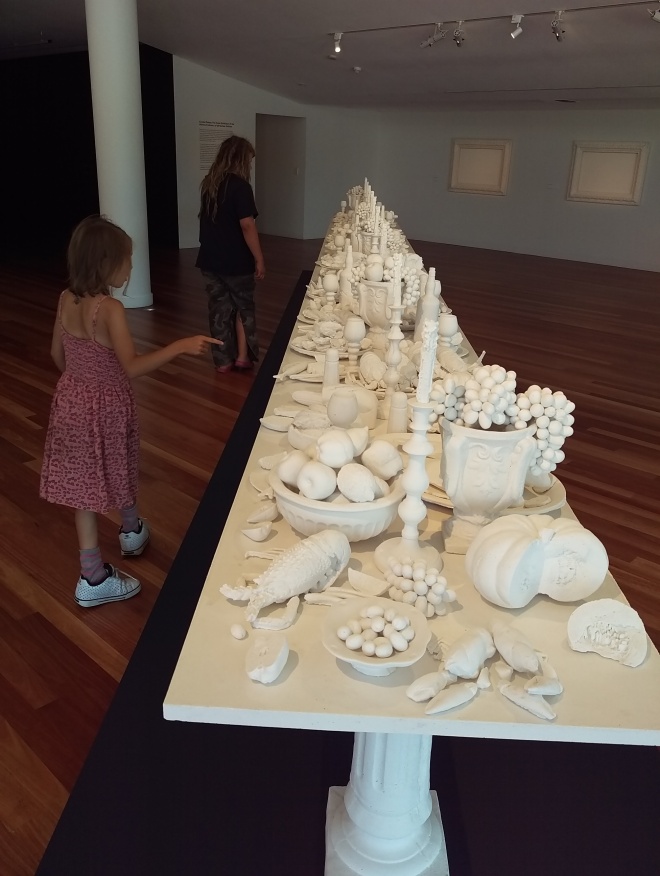 The exhibition in the contemporary gallery was amazing! Elki and Anusha were enthralled by recreation of The Last Supper made completely from salt,

And the intriguing glowing uranium chandeliers! 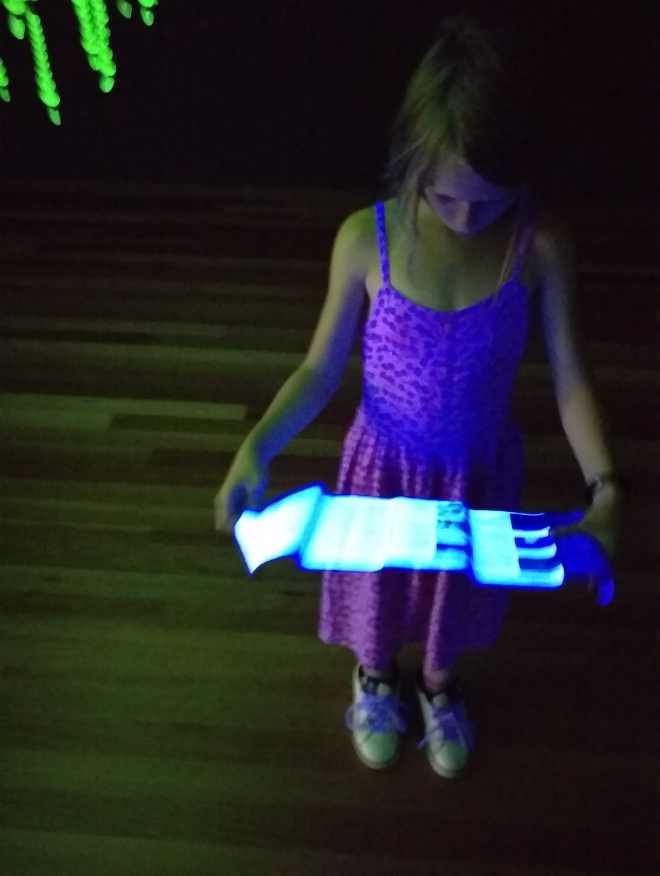 Anusha found it was not only the chandeliers that glowed,

and we were all fascinated by the intricacies and details in the food of the banquet.

The children were able to feel some of the pieces of food, amazed that it was just salt!
Ken and Julia Yonetani’s exhibit was a favourite for all of us.

The next day found us at the NMA. The gallery we spent the most time in was that of a temporary exhibition called Encounters; an exhibit of Aboriginal history. Elki is always most fascinated by the Aboriginal weapons and tools; particularly liking this shield and club.

Anusha is more often drawn to the jewellery, adornment, and craftwork; this feather necklace a favourite. 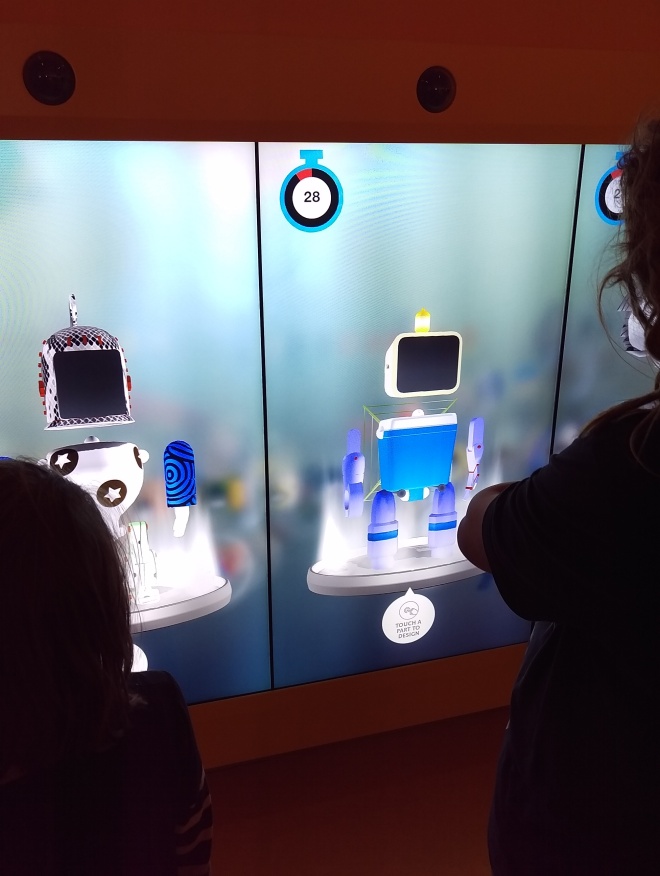 Undoubtedly though, the children definitely got the most enjoyment from the Kspace. Here they were able to design their own robots, which they then used in a computer game to complete tasks in a particular time in history.
Coincidentally, the first time they played I joined in, and we were taken back to the 1980s protest of the damming of the Franklin river in Tasmania!

Zubin had a turn at being a robot with his Dad too, it was too cute not to capture!
Elki and Anusha played again later after we had wandered the rest of the museum; and then we headed back to camp and some downtime after our two full days.